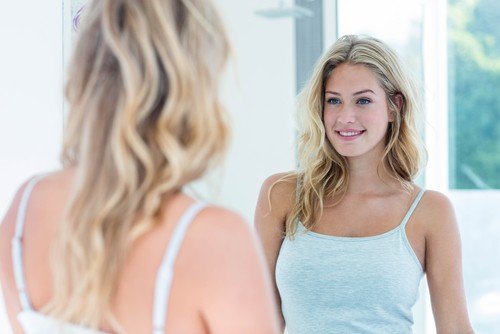 New virtual reality goggles are giving potential plastic surgery patients a glimpse of what they would look like with breast implants, according to the U.K.’s The Mirror. The ground-breaking technology, dubbed “boob goggles,” launched in England earlier this year. The virtual reality goggles allow patients to view themselves with different-sized breast implants using simulation.Patients who have used the technology say seeing their simulated image helped to quell nervousness and anxiety before their surgery. The users also felt that their simulated image matched their post-op results.

The software comes loaded with a wide selection of implants in a range of sizes and shapes. Physicians can swap out implant simulations in real time to meet the patient’s goals.The simulation shows the difference between placing the implant over or under the muscle and even allows patients the ability to move the location of future surgical scars.“The capacity to give patients a realistic vision of what they will look like after augmentation is exciting,” said Dr. Jack Peterson, M.D.Peterson is a Topeka, Kansas, plastic surgeon who encounters patients who are interested in surgical procedures but are often nervous about what they will look like after surgery.According to Peterson, many patients visit plastic surgeons with a particular size of breast implant in mind, but that size may not look natural on the patient’s frame.“Handing a breast augmentation patient different-sized implants, talking about how many CCs or placing different-sized implants in a bra does not always adequately show them how different sizes would look with their body type,” Peterson said.Easing Anxiety With Virtual RealitySome individuals may be put off from having a procedure because they are unable to get an accurate idea of what they would look like with implants.The technology also allows patients to be active participants in their consultation and communicate effectively with their plastic surgeon.When a patient puts on the goggles, she sees herself in a virtual dressing room with multiple mirrors. She then sees herself with different potential implants, and when she looks down, she sees the cleavage she will have after the surgery.Patients are also able to strike a pose to see their new breasts from different angles.The goggles, developed by the Swiss-based tech company Crisalix, are now used in some clinics across the U.S.Crisalix is no stranger to designing applications for plastic surgeons. Earlier versions of the goggles used iPads to scan images of a patient’s breasts in 2D, and then simulated the image into 3D. Patients using the first version of the goggles got an idea of what they would look like after surgery, but not with the detail and dynamics of Crisalix’s newest virtual viewer.Other Applications Beyond AugmentationThe device also works for breast reduction procedures and implant removals, as well as tummy tuck procedures and buttock lift procedures.The technology has also proved to be valuable for women who are seeking breast reconstruction after undergoing mastectomy surgery.“The ability this technology gives a breast cancer patient to see what they would look like after experiencing a mastectomy is invaluable,” Peterson said.Crisalix’s virtual reality goggles also help patients see what they would look like after a face-lift or rhinoplasty surgery, as well as minimally invasive procedures like dermal fillers and Botox.This high-tech tool is not just available for surgeons. Individuals who are considering plastic surgery can sign up to use it at home for $99 and simulate a variety of facial and body procedures.

The Mirror. ‘Boob goggles’ allow women undergoing plastic surgery to see their new breasts BEFORE the operation. The Mirror. 29 September 2017.

Pregnant Women Should Wait to Have Plastic Surgery Procedures

The American Society for Aesthetic Plastic Surgery (ASAPS) predicts that labiaplasty, a new type of …