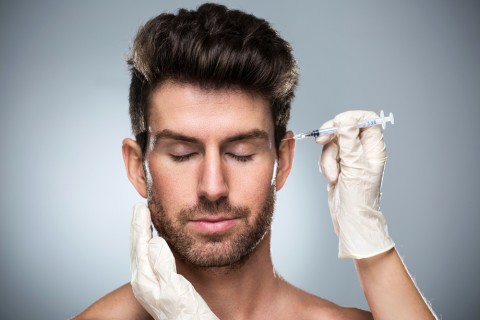 The American Society for Aesthetic Plastic Surgery reports that more men than ever before are asking their doctors for cosmetic injectables. One particular procedure on the rise is the injectable, botulinum toxin, known popularly as Botox, Dysport and Xeomin.The number of men getting this cosmetic injectable reached 453, 281 in 2016 and represented 9.9 percent of the total number of procedures for men and women last year. Statistics provided by the American Society of Plastic Surgeons showed a 15 percent increase in male botulinum injections since 2000.

Men who chose to use Botox, Dysport or Xeomin as a cosmetic treatment cited motivations that are similar to women who opt to undergo the treatment; they want to look younger in order to maintain their competitive edge in the workplace.

“Many individuals are sensitive to the fact that looking older may translate an inability to perform their job,” said Dr. Jack Peterson, M.D., a Topeka, Kansas, plastic surgeon who has seen an increase in male patients in recent years.Most males getting Botox are in the 35 to 65-year-old age demographic and have the toxin injected into their brow area and around their eyes to smooth out lines and creases.“These lines and creases may make patients look older than they are,” Peterson said.Another benefit to injecting Botox and botulinum toxins in the brow area is that they help to prevent sagging brows.“Drooping or sagging brows may cause patients to appear angry when they are not or tired even after a full night of rest,” Peterson said.In some cases, men are choosing toxin injectables and other cosmetic procedures because their significant others have success with their own aesthetic procedures and want to keep up.“It is not uncommon for a wife or partner to get some aesthetic work done and her husband to get his own work after he sees how she has benefitted,” Peterson said.Men who undergo aesthetic procedures also cite reasons of wanting to attract a mate and are influenced by social media, selfies and celebrities to look their very best.“Men are putting a greater effort into their appearance more than ever before,” Peterson said.Botulinum injectables aren’t the only injectable procedures being sought by men. Dermal fillers, like Juvederm and Restalyne are also popular with this group. These options also help fill out fine lines and moderate creases. Dermal fillers also replace the facial fat volume that diminishes with age, leaving skin wrinkles and sagging.Other popular procedures for men include blepharoplasty, or eyelid surgery. Blepharoplasty reduces drooping eyelids for either aesthetic reasons or for functional reasons if sagging or excess skin blocks vision and impedes the patient’s ability to drive or do other things.Neck lifts and chin augmentations are also popular procedures for men. The neck lift procedure defines the jaw line by removing excess skin and tightening the skin for a more chiseled look. Chin augmentations use bone or implants to elongate the lower jaw, which yields a more masculine and sculpted appearance.Many men are also choosing liposuction to reshape their midsections after weight loss. Liposuction removes excess fat from targeted areas, giving patients a defined appearance.“The midsection can be a hard to tone area for both men and women, and some patients want a little extra help from liposuction,” Peterson said.Some men also choose to surgically reduce breast tissue if they suffer from gynecomastia, a condition that causes enlarged breast tissue in males. It affects men of all ages, but middle-aged men are the largest age group affected by the condition, with up to 64 percent of men this demographic affected.

Lip Reductions May Be the New Norm

Tummy Tucks - When You Should Wait

Struggling with sagging facial skin? Do you have jowls, wrinkles or creases? If you want to reverse …