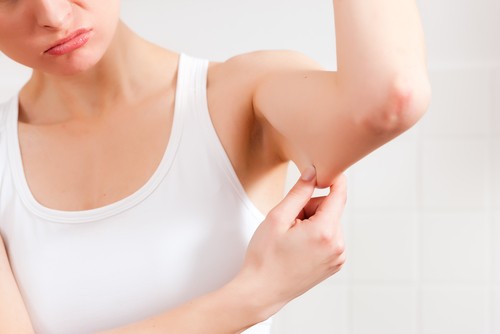 Typically used to treat the face, dermal fillers are also proving to be useful and popular for treating sagging upper arms, according to the New York Post.

Loose or sagging upper arm skin, also known as “bat wings,” occurs as a byproduct of the aging process. Skin quality and muscle tone diminish over time, leaving the area slack and sagging.

“This area is extremely hard to tone, and gets even harder to tone as we get older, despite a healthy diet or how frequently we hit the gym,” according to Dr. Jack Peterson, M.D.

Peterson is a Topeka, Kansas, plastic surgeon who often encounters patients who are upset over their upper arms.

Patients who experience significant weight loss are also frequently left with loose skin in their upper arm area, because the skin has lost its ability to retract after being stretched out for long periods of time.

These feelings of self-consciousness may cause women to shy away from certain cuts of clothing, avoid having their picture taken or always have a sweater or jacket on hand to cover up their upper arms.

Some patients also experience painful rashes, infections or other skin irritations because their excess skin may cause sweating or chafing.

There are alternative ways to treat sagging upper arms besides constantly covering up.

One is a procedure called the surgical arm lift, or brachioplasty procedure. During the procedure, unwanted fat and extra skin are removed and remaining arm tissue is sculpted to give the area definition. Skin is tightened and sutured shut.

The upper arm lift is a popular procedure both in Peterson’s office and across the country: According to the American Society of Plastic Surgeons, upper arm lifts have increased 4,959 percent since 2000.

Radiesse to the Rescue

Dermal fillers, like Radiesse, are an increasingly popular choice for individuals who want to resculpt their upper arms but do not want the recovery time of surgery.

“Dermal fillers can help give shape to other parts of the body that have been traditionally treated through surgery,” Peterson said.

Radiesse is a calcium hydroxylapatite-based gel dermal filler usually used to replace lost facial volume and fill in moderate to deep facial lines and wrinkles around the temples, nose and mouth. Radiesse is very pliable, and when used in the arms, it adds volume to treated areas, giving them a more defined shape.

“Upper arm skin thins over time, and constant pressure on the skin from being folded or sagging can lead to creasing or wrinkles,” Peterson said.

Aside from the face and arms, Radiesse is FDA-approved to use in the hands.

“Aging impacts the hands just like it impacts the rest of the body, and because there is very little fat volume on the hands to begin with, when it is lost due to aging, it becomes very noticeable,” Peterson said.

Wherever injected, the results of Radiesse are seen almost immediately and last 12 to 18 months.

Trying to get rid of a double chin on your own can be pretty frustrating. Age makes your chin skin g…